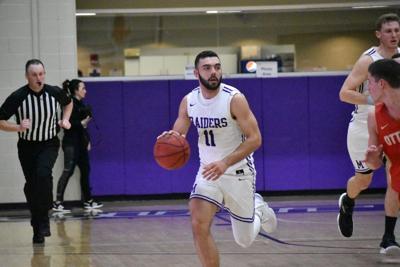 ALLIANCE, Ohio: Mount Union opened the OAC tournament with an awkward start. Missed shots, injuries, and timeouts that are not usually taken dimmed the first half for a packed crowd. A tough first half meant a chance at an improved second half of basketball. Eventually the Raiders (23-3) found a way to beat Otterbein (8-18) 75-57.

D’Vontay Friga came off the bench and had 20 of the Raiders 36 first half points. Mount Union’s offense is usually centered around Collen Gurley, Nathan Bower-Malone, and Friga. Bower-Malone left with an injury and only mustered three points before his night was over. Gurley was scoreless for the majority of the game, which meant Friga had to turn it on.

The second half saw Friga gain more attention from the defense and so others exceled. Logan Hill added 10 points, John Carroll had two massive dunks adding seven points, and Collen Gurley got on the board adding eight points and a game high seven rebounds. Friga added 11 more second half points to finish with 31 and give the Raiders a late run to win it.

A few weeks ago coach Fuline called it “Laughable” that senior D’Vontay Friga was coming off the bench. While I’m sure it has pained the coach to have Friga not start, it has worked. Friga has adjusted to the role and has certainly not lost any motivation. The sixth man is averaging career highs with 15.2 PTS/G and 4.8 REB/G. As a team, Mount Union is in the middle of the best season in school history.

An off night for the Raiders for sure, but proof that their “next man up” mentality is alive and well. Mount Union will host Heidelberg Thursday night at 7pm. The game can be heard on 91.1 WRMU or the Mount Union live stream.