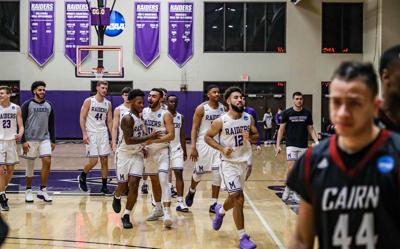 How We Got Here: Mount Union is coming off two home wins to start the tournament. The Raiders defeated Cairn University in round one, 107-76. In round two Mount Union saw better competition in York College, but won again 90-77. The Raiders saw record breaking performances in both games. Against Cairn, sophomore Collen Gurley set a school record with 11 made three pointers. Gurley ended the game with 40 points. Game two was senior point guard Nathan Bower-Malone’s turn. Bower-Malone set a new single game scoring record with 53 points. A great start to the tournament earned the Raiders another home game.

A look at Wittenberg: The Tigers are 28-2 on the year and ranked No. 9 in the country. Wittenberg averages five less points than the Raiders, at 80.7 per game. Wittenberg will rely on their three double digit scorers in Connor Seipel (16 PPG), James Johnson (14.8 PPG), and Jake Bertemes (13.6). In the Witt’s last game, the Tigers had a close 77-73 win over Susquehanna. In a close and must win game Connor Seipel put up 33 points.

Gameday: After the COVID-19 outbreak, both schools agreed the game will have restricted attendance. Only essential personnel, immediate family members of the athletes, and media will be in attendance. The game can heard on 91.1 WRMU and viewed on the Mount Union live stream.