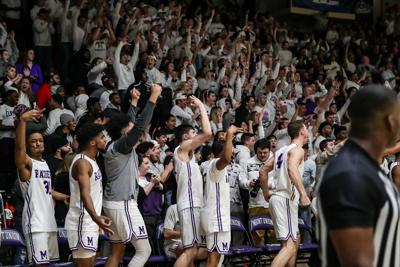 Mount Union men’s basketball must live with sport’s worst looming question, what if? The team received news mid-afternoon Thursday that NCAA would be canceling all championship tournaments. More news broke that the OAC would be canceling all spring sports. At 27-3 and headed for a sweet sixteen appearance, the Raiders end the best season in school history wondering what if?

Mount Union was one day shy of play Wittenberg in a sweet sixteen matchup. Players spoke Thursday night after digesting the tough news.

“This is a family, it will be forever,” said Nathan Bower-Malone. The senior point guard from Stow ended his career year on a high note. In Mount Union’s last game against York, Bower-Malone set a single game scoring record with 53 points. Bower-Malone is averaging career in points (17.4), assists (5.2), and rebound (4.2). Bower-Malone finished as OAC player of the year and a member of Mount Union’s 1,000-point club.

“I’m grateful for this chapter of my life. Mount Union will always hold a special pace in my heart,” said senior Sixth man D’Vontay Friga. Friga is also having a career year, upon accepting a new role off the bench. The Cuyahoga Falls product finished averaging 15.1 PPG, 2.1 APG, and 5.2. In his senior season, Friga earned all OAC first-team honors and joined Mount Union’s 1,000-point club.

“Dear Raider Nation, we will be back” were the words of Collen Gurley. The sophomore guard is another Raider who had his best year. Gurley finished averaging 16.7 PPG, 1.6 APG, and 4.1 RPG. Gurley was named to all OAC second team and broke the school’s made three pointer record with 11 against Cairn College in round one.

“Being apart of this team has been a blessing. This was the chance of a lifetime and I will remember it forever,” said John Carroll. The senior big man headed a defense the OAC feared, Carroll averaged a block per game with 3 rebounds.

The final Quote came from Senior Tanner Slack. “I think the toughest thing for me was finding out I played my last basketball game ever. Despite all the work we put in, we don’t get to finish it out. I’m thankful I got to play with this team and I know they’ll be back,” said Slack. The Senior forward from New Concord chose Mount Union despite Muskingum being right around the corner. Slack’s career high of 24 points came in a big road game against John Carroll early in the year.

The 2019-2020 Mount Union men’s basketball team will go down as the one of the best in school history. It will be the players on the team that show that, not just their record.

“Raider Nation, we will be back.” – Collen Gurley