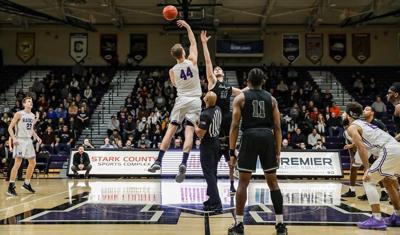 February 27th will go down as a very successful day for Mount Union basketball. OAC honors were announced, players reached new heights, and Mount Union moved on. The Raiders will play for the OAC tournament title after a 97-66 win over Heidelberg.

Heidelberg never lead in the OAC semifinal, Mount Union wasn’t going to lose. Once again Mount Union’s second half was better than the opening half, but the win was everything the team wanted. Four players scored in double digits; 20 points from D’Vontay Friga, 15 points from John Carroll, 14 from Braedon Poole, and 10 from Chris Painter. At one point the Raiders had four dunks in a row and lead by more than 30 most of the closing minutes.

“I’m just loving the experience now” said John Carroll who had a career high with 15 points “It’s kind of me realizing that it’s winding down, so it’s time to put it all out on the line.”

“It’s Crazy, to think about the athletics side of the school and to be a part of something even bigger than myself” said Friga “I give a lot of credit to my coaches and teammates for putting me in a position to get a thousand, but yeah this moment is crazy because I didn’t get to do this in high school, put the work in, didn’t have a jersey freshman year, and now I’m standing here with a thousand points.”

After the big win, all eyes move to Saturday night. Mount Union will take on John Carroll for the third time this season. The Raiders won both matchups, the second being at home where they won 88-85.

“I’m excited for the energy, I got to see the OAC championship last year” remembers Friga. Big man John Carroll commented on what’s needed to beat the Blue Streaks stating “They’re a crafty team, straight out of the first five minutes we have to have the energy.”

The game is this Saturday at 7:30pm inside the MAAC. Game can be heard on the Mount Union live stream and 91.1 WRMU.