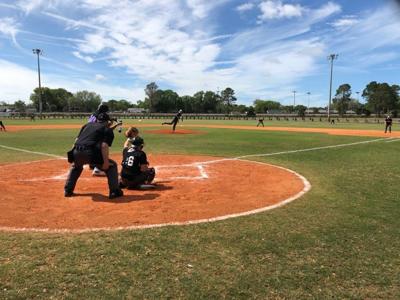 Mount Union will be playing baseball in Florida for the next week. The team is traveling through the Orlando area playing different teams. Day one saw the Raiders play in Lakeland, home of MLB pitcher Chris Sale.

The Raiders opened Florida play Friday morning with a double header against Waynesburg University (PA). Game one saw Coach Paul Hesse’s squad take on MLB hopeful, Mason Miller. Mount Union Grabbed an early 3-1 lead off small ball play. The Raiders had one big double from Nate Duliba, along with stolen bases from Dwayne Sumler and Lou Cardona. The Raiders jumped out to the 3-1 after three innings.

After this Miller settled in and Waynesburg got some much needed hits. The Yellow Jackets scored in every inning after the third, forcing Carson Davis to exit in the fifth and two more relievers to enter. As the Yellow Jackets began to climb back, Brandon Durbin gave Waynesburg their first lead of the game with a solo homerun off of Nolan Hessel.

More runs came for Waynesburg including 3 in the sixth. A game one come back went to Waynesburg, 6-3.

“I was disappointed with the first game, we all were.” Said coach Hesse. “The things is, this is there team. You can see this as they responded accordingly in the second game.”

The Raiders leaned on seniors in game two. After playing small ball, Mount Union no longer had to face Mason Miller. The Raiders went aggressive and hit four homeruns to create a 18-5 Win.

The Raiders found 9 of their 18 runs in the first inning after Senior Shawn Baker hit a grand slam. Baker’s big hit wasn’t the end, Nate Duliba added a three-run triple and the Raiders had a commanding 9-1 lead after one inning. In the second inning, the Raiders found more runs from Senior Ryan Boyd. The solo shot gave Mount Union a 10-1 lead and a road map to a win.

“They did a great job, you expect that out of Seniors.” Said coach Hesse talking about the bounce back game “We did what we needed to do by getting out in front and putting the game away.”

The Raiders will head to Auburndale for another double header tomorrow. The team will take on North Park (ill). The games can be heard on 91.1 WRMU and the Mount Union livestream.